What If You Weren’t Afraid? 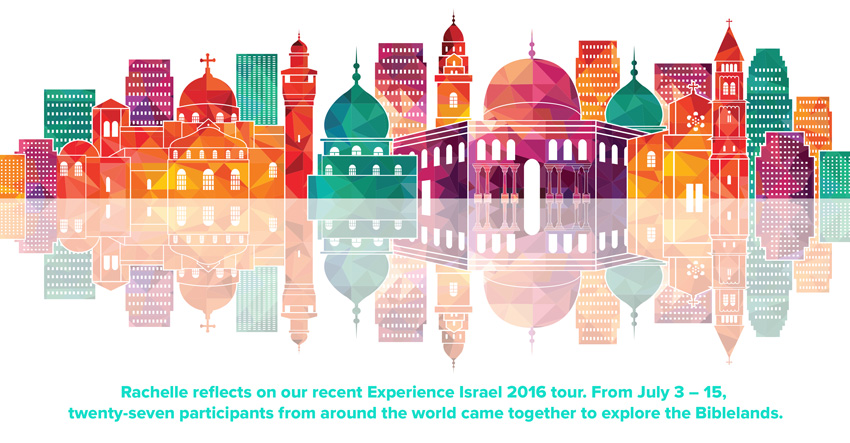 ‘For the Spirit God gave us does not make us timid, but gives us power, love and self-discipline.’ 2 Timothy 1:7 NIV

From this verse came a question that found me on a plane to Israel, embarking on a twelve-day tour with a diverse group of young adults. When presented with an opportunity such as travelling with Isreality International, I ask myself, ‘What would you do if you weren’t afraid?’ This became a recurring theme in my own experience of the Holy Land, as well as in encounters with locals and Biblical tales of victory in the face of all odds.

So many people asked me before leaving, ‘Why Israel? Isn’t it dangerous? What could you learn there that you can’t in church at home?’

At first my answer was simple: ‘why not?’ If I am a follower of Jesus, then I have a connection to His land and people that I want to explore more. I later discovered that this response is foundational but the true purpose behind ‘Why Israel?’ is far more characterised by subtle shades of meaning.

Through the teachings of Willem Glashouwer and Andrew Tucker, I came to learn that God has made covenants with the people of Israel that still stand today.

Visiting sights such as Caesarea and Mount Masada, it became apparent that various empires throughout the centuries have challenged the place of the Jewish people and continue to do so. Nonetheless, God has promised that, ‘[He] will bless those who bless you, and whoever curses you [He] will curse’—words that rabbis continue to share as a declaration of God’s sovereignty over the land of Israel’ (Genesis 12:3NIV).

Walking through the Promised Land and hearing about the political, physical and spiritual powers threatening the existence of this minute nation, it is abundantly clear that God has a specific purpose for Israel that cannot be touched by human will.

It is nothing short of a miracle that Israel was re-established in 1948 and persists in the current political climate. In Israel I began to understand the nation’s complex political, spiritual and historical significance in contemporary society.

Even more, I learnt that the safest place to be is in the will of God—a sentiment echoed by Jews. Jews who follow Jesus and Arabic Christians alike. Suffering is not divided by east and west; it is a universal experience.

However, my life in Australia enables me to believe I can live in my own protection whereas people of faith in the Middle East must turn to God daily to ask for the grace of one more day. In Israel, God speaks to His people both in the fire and in the still, small voice. He miraculously uncovers terrorist plots in the final moments before disaster strikes and whispers encouragement on the waters of the Sea of Galilee.

In the Holy Land, as scenes in the Bible came to life around me, I began to realise that God is so much greater than I had ever dared to imagine.

Why Israel? Because God has not forgotten His people but in-grafted us, those adopted into His family, with them into His plan of deliverance.

Isreality is an international community of young Christians exploring questions such as, ‘Who are the Jewish people?’ ‘What is the significance of the Biblelands?’ ‘What does this mean for our personal walk with Jesus?’
Visit website

What If You Weren’t Afraid?

‘For the Spirit God gave us does not make us timid, but gives us power, love and self-discipline.’ 2 Timothy 1:7 NIV From this verse came a question that found me on a plane to Israel, embarking on a twelve-day tour with a diverse group of young adults. When presented with an opportunity such as…

That’s how I feel after returning from a week in a developing country; pretty much a whole new person. Back in August, I went with other Christian radio announcers to Nepal as the guest of CBM Australia. We were there to raise money on-air for their ‘Miracles Day’ campaign. Little did I know how much…