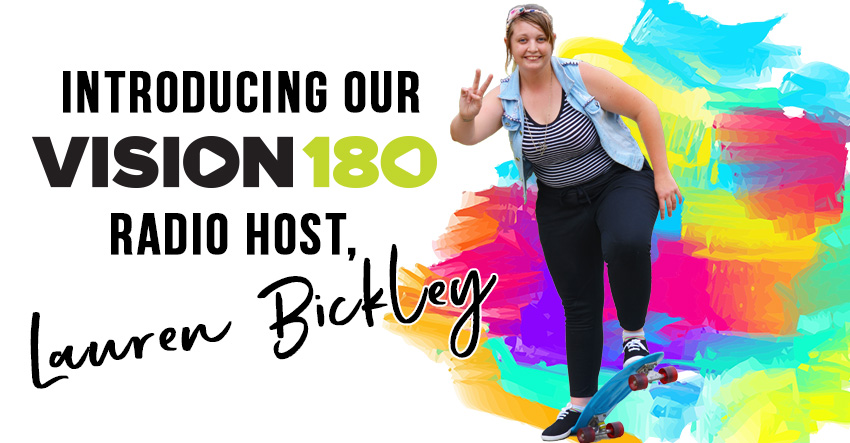 You may have heard her voice on Vision180 radio or seen her face on our social media posts but we thought it was time for you to get to know our Vision180 Radio host, Lauren Bickley.

You’ve recently joined the Vision180 staff, but volunteered since the beginning; why?

I’ve been volunteering with Vision180 since day one and have never looked back.

Radio is a huge passion of mine—I was lucky enough to do work experience at a radio station when I was sixteen and from that time, I’ve known it was my passion.

Since leaving school, I’ve been in and out of studios, doing as much voluntary work and gaining as much experience as I can. I think that’s the best way to approach anything—if you’ve got a dream just keep at it, you gotta do the hard yards and trust God will make a way. He hasn’t let me down yet.

When I started at Vision Christian Media I was a youth leader, so being part of the Vision180 launch was a dream. I’ve been incredibly blessed at Vision because it’s allowed me to attach my faith to my passion.

Youth leadership… that would’ve been pretty interesting; how’d you start?

I kinda fell into youth leadership. It all started when I was seventeen, I saw my pastor chatting to my friends. Me being the graceful and polite person I am, I barged into the conversation saying, ‘Oi, what are we doing?’ and my pastor responded, ‘You’re doing youth.’

And that was it. No huge God-moment, no skies ripping apart or earthquakes with a booming voice saying, ‘Yes, Lauren, this is the right path.’

Just a simple opportunity and one that radically changed my worldview and tested my faith in ways I’m not sure I’ll ever comprehend.

It wasn’t planned and I’d never really thought about it. To be honest, I’d been told I wasn’t leadership material by teachers so being a leader of anyone was out the question. The fact that I was able to lead and impact the lives of young teenagers for five years still blows my mind.

You say it changed your worldview. In what ways?

I was a youth leader from age 17 to 22 and those are pivotal years. Let’s be clear, I’m still growing in my faith and I plan to radically change and grow for the rest of my life. If I’m the same person in 20 years I am now, I’m doing it wrong.

Is there one particular thing in youth that helped you shape your faith?

The hardest thing I learned in youth was how to do the right thing even when it costs you the world. Towards the end of my youth leadership season I had become great friends with another leader. We worked closely and he became one of my closest friends.

However I began to sense something wasn’t right. Over the years God has blessed me with the gift of discernment and let me just say it sounds great on paper but when you know real life struggles, real life concerns and even real life blessing of those around you—it can get pretty intense and incredibly humbling.

With this particular person I could feel walls shoot up and I knew something wasn’t right so I kept praying and pursuing God. I ended up noticing something that, if left alone, would not only hurt everyone around him but also destroy his future potential. I knew God was urging me to speak up— however I knew if I did, it would shatter our friendship.

So that was the choice. Protect his future and shatter my present, or at least that’s what it felt like. I won’t sugarcoat it, it was tough. I lost a friend and I grieved for how life had been. But I given the chance to re-do, I wouldn’t change a thing.

It was in those moments that I had to fully trust God and my faith grew incredibly.

Most of all, God didn’t leave me on my own. I was blessed with incredible friends— an amazing woman of God took me under her wing, became my mentor and pretty much became a spiritual family.

I am the person I am today because of the tough choices God has helped me make. Living with Christ isn’t the absence of struggles, but rather it’s the presence of His peace amidst the struggles. Favourite colour:
Orange (like a sunset 😉 )
Favourite Music genre:
I’m a sucker for a bit of rock…
Hidden talents:
Balloon animal making
Favourite Bible Verse:
I always find myself back at Ecclesiastes 3
What food could you not live without?
Burritos or chicken wings. It’s a tough call
Breakfast, Lunch or Dinner?
Brekky for sure. If I can have multiple brekkys it’s a great day
Morning person or night owl
Morning but I make a special exception for Vision180 weekends

If you have any questions for Lauren email her at LiveDifferent@Vision180.org.au

Lauren Bickley is a Radio Host and Communication student with a passion for young people. Dabbling in a few different languages and meeting as many people as she can, she believes everyone has a story and through radio, she wants to spend the rest of her life hearing them.

Okay. I’ll admit it. You know those people who adopt ‘cool’ words and just say them over and over again? That’s 100% me. I don’t even mean to—I just get sucked into word trends and then spend the next six months with nothing but ‘awesome’ or ‘rad’ in my vocabulary. One word I used to…

When the 2018 Met Gala photos went up, I found myself clicking through the best dressed shots. Despite not caring about fashion nor being an avid consumer of celebrity lifestyles, I was lured by headlines like ‘Rihanna is the new young pope’ and ‘Jared Leto channels Jesus’. It wasn’t until much later that I decided…

God, Skateboards and Making the Best of a Theft

Lauren interviews Kate from Kippy Skateboards Pretty pumped, this is a bit of an ‘insta-dream’ conversation happening, because I follow you on insta and your page is full of living-the-dream photos… It’s pretty awesome. But for those who haven’t stalked you on Instagram like I have, what exactly is Kippy Skateboards? Kippy Skateboards is the… 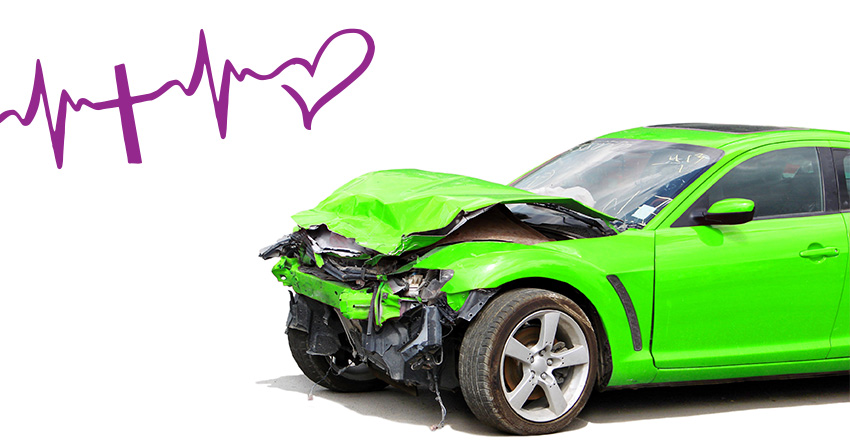 Knowing a God of Grace

Last month I was in car accident. I’d like to say I took it in my stride. That I ran straight to all my mates, hands raised in praises and hallelujahs. Realistically, I sat in the ambulance sobbing—and I spent the next few days staring into space and moving from bed to chair to couch… 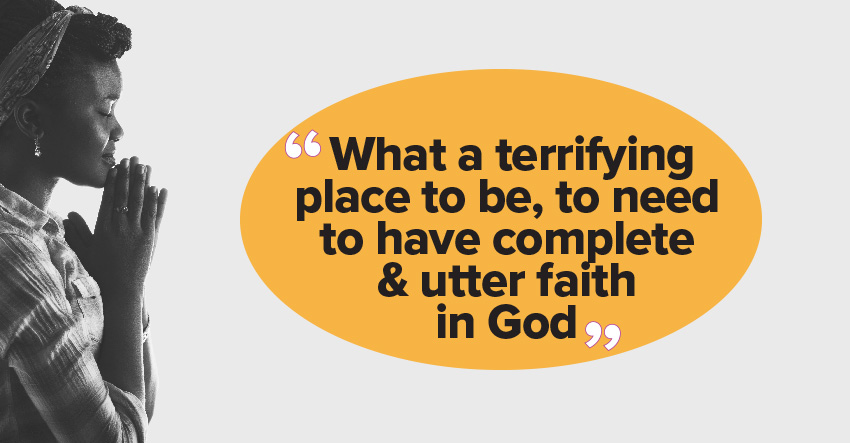 It’s funny how God uses all things to spread His word, even social media. Scrolling through my feed recently, I saw an image with this quote on it: ‘If all your prayers were answered, would it change the world or just yours?’ I’m gonna be real here, it hit me pretty hard and made me…

… to be a Christian at School!” Vision180 interviewed Connor Stace, a TeenStreet coach, to get his perspective on Christian camping. You’ve been involved a fair bit in the camps at TeenStreet; what exactly has your role been? Well, it was really the first youth camp I got involved in. This is my seventh year… 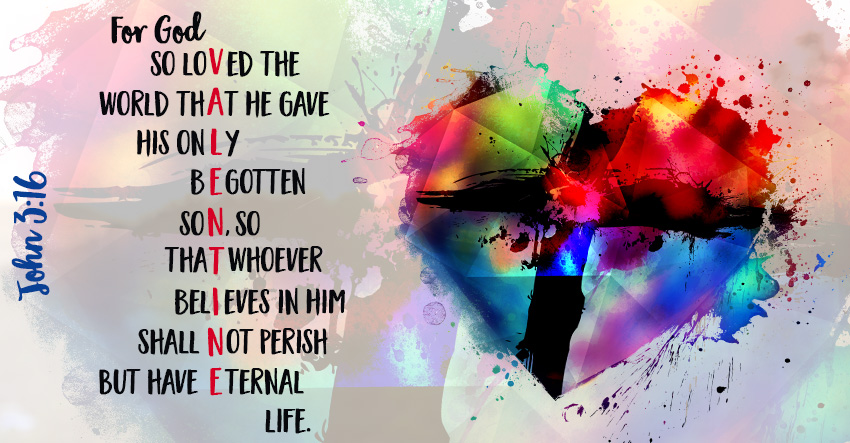 As far as days go, very few seem to be as controversial as Valentine’s Day. No matter who you ask, someone has an opinion about it and that opinion tends to sway depending on the situation. A person in a relationship may find the day full of possibility and love, whereas someone who’s recently had…

When a routine scan showed that Chloe Howard had a hole in her heart and two clubfeet, doctors told her parents to have an abortion. But they knew God knew better. When she was born, her heart, and one of her feet, were healed—a miracle they could never have expected. Her clubfoot has required six…